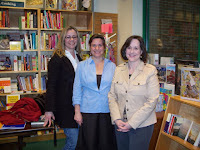 Amy and Lynne had a great time at the Grub Street South program hosted by Buttonwood Books on Acquiring a Literary Agent. For more details on the talk, given by literary agent and Grub Street Writers founder, Eve Bridburg, see yesterdays post.

We can't say it too many times: network, and put positive energy into your writer, agent, editor relationships. Remember, you're nurturing a writing career.

Lisa
I'm putting the writing bar higher these days. I've been working on my novel. Working at work. Living the rest of my life. I can't wait for the Muse & the Marketplace Conference in early May in Boston!

Amy
I bought Jon Clinch's highly acclaimed debut novel Finn. His book, his entire concept, is a perfect example of what it is to be bold. In terms of networking, I urge each of you in and around New England to attend PEN New England's PEN Hemingway/Winship Awards this Sunday, April 1 at the JFK Museum in Boston. You'll come away both inspired by the speakers and agog over the writers you'll meet. If you haven't joined PEN yet, there are five across the country, please do so. You won't regret it.

Hannah
In anticipation of edits on Draft One (ten) from the group, I am preparing to sit at the computer for another few weeks, and as a "break," to finalize a query letter. How do I write thee, let me count the ways... Many thanks to everyone (a la Miss Snark, Jenny Bent, Kristin Nelson) who shares strong queries with the public!

Lynne
I met a freelance writer who is looking for an agent for her book; and I could learn more from her about querying major magazine markets. She and I have set up a meeting to share information. I continued to work on revisions to my novel. My business partner, aka my husband, and I worked on a detailed publicity plan for Negotiation Generation. I was in touch with Penguin's publicity department and found out all the ways they will work with me in my efforts. Chris Castellani, Artistic Director of Grub Street asked me to sit on a panel on promotion and publicity at this year's Muse Conference.

Posted by Lynne Griffin and Amy MacKinnon at 6:54 AM