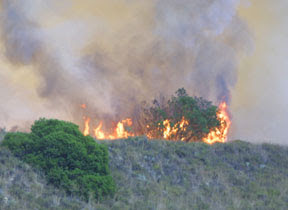 For hours we smelled smoke from fires burning in Malibu. Its heavy scent took up residence in our hair, our clothes. That had been the first evidence that the fires on the television were really happening.

It doesn't snow in California. That's what I believed - until today.

This afternoon my husband called me into the backyard of our California home. "It's snowing," he announced. "It isn't," I retorted.

But light pale flakes were falling around us: the dusting of ash from mountain fire. Twenty minutes later, the sun was a dull orange circle in the sky. The sky was gray. It was evening, suddenly, at three in the afternoon.

"We will need to evacuate," I offered to Richard. "We'll see," he replied. " The fires are still miles away."

"Let's hike up the trails," I suggest. My children agree in an instant.

We slip into crocs. I gather our sunglasses at the front door; the ash stings as it blows in our
eyes. We meet neighbors at the trailhead. This is an event. The winds outdoors are 60 to 80 miles per hour (Santa Anna winds off the Pacific, I am told). My three-year-old insists on a piggy back.

The fires are not contained.

My agent once told me a writer must live, only then can she have new experiences to write
about.

I hope we are not evacuated, but what if we are.

Posted by Lynne Griffin and Amy MacKinnon at 5:00 AM

Oh Lisa, I hope all is well. I remember that fine ash from many a fire stoked by the Santa Anas. Keep us posted...fingers crossed for you and yours!

I hope you and your family stay safe. The Santa Anas are blowing here too (we just moved to southern CA, you may recall). It's eerie, like a tropical storm without the rain.

We had to evacuate several times when we lived in New Orleans. Common wisdom there is to take photo albums and photos, because those things can't be replaced but have great sentimental value.

Thanks for your kind wishes, Kristen. It's a little crazy. Reporters are posted all over, reporting on the fire - it feels like there's a Nor'easter (those of you in MA know what I mean).

Shauna - crazy stuff this is!

Lisa,
I hope the day was good to you. We have close to a dozen relatives and friends who were evacuated today. What a welcome So. Cal. has given you!

I have cousins in San Diego and just heard a fire is 30 miles from their home.

Good luck to you all!!

Thanks for your concerns and best wishes. We are fortunate so far.

How different the world can suddenly become; I am suddenly a character in a novel.

I hope things are under control out there soon. Writers are among the few souls who would be watching the details in the underlying story in a situation like this. In the face of adversity, you've made me smile. I'm hoping for the best for you and your family.

That's terrifying.
My grandfather lives out there in Vista, in northern San Diego county. I don't think the fires have stretched there as of yet, but I hope the best for everyone out there. Good luck and take care.

Lisa, are you still okay and safe?

Actually, better now than ever - except the 101 was at a standstill this morning because of trouble on the 405.

It's a domino effect.

How about you? I know you're in So Cal.

Poor thing, I keep calling her to make sure she's okay. Again and again...is the car packed, gas tank filled, do you have cash? Lucky for her she's 3,000 miles away.

Thanks for asking, Lisa. We're fine, although many places not so far away did have fires, according to the map in this morning's newspaper. Yesterday the smell of smoke was strong in the air, and we could see smoke. Today the air looks and smells normal.

Lisa, if you do need to evacuate, you're welcome to come here (assuming that the fires haven't). I know we don't know each other, but after Katrina, strangers took in many New Orleanians. A man we didn't know let us live in his trailer for 2-1/2 months. Strangers have helped us, and we would be glad to pay it back by helping someone in the same situation. My email is shaunaroberts [at] nasw.org.