While I was on vacation last week, my publisher called with good news. She said she couldn't wait, it was too fantastic and it was. Tethered was chosen by Borders as one of their August picks for their Original Voices Program!

Naturally, I checked out what they're featuring for June. But what does this mean? Lots of good things it turns out. As I understand it, my novel will be among the five other novels selected for the program among all the novels scheduled for release in August -- not just debuts -- to be prominently displayed on the front table of every Borders in the nation courtesy of Borders. It will also appear with a written endorsement, courtesy of Borders. And it will certainly help build that all important buzz. Again, courtesy of Borders.

Now that's all well and great and I'm more grateful than I can duly express here, but it's not the best part. What moved me to tears was the review the buyer wrote about Tethered on the Borders web site. She didn't have to do it, it was enough that she nominated me. Going this extra mile took time and effort. And what she wrote...well, she got the book. She read it the way I'd always hoped someone out there might. So thank you Deanna P. From the bottom of my soul, thank you. 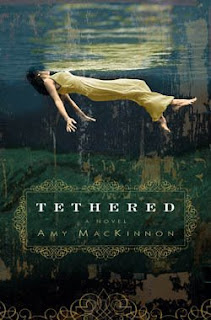 EXPERT REVIEW
:
5 out of 5
An Original Voice for Mystery! June 9, 2008 By Deanna P, Mystery Buyer from Borders Home Office (read all my reviews)
"Original Voices is a Borders program that highlights fresh, compelling, innovative and ambitious works from new and emerging talents. TETHERED by Amy MacKinnon is a perfect example of a book that belongs in this program, bringing together unforgettable characters and a well-plotted mystery with language that is rich and full.Clara Marsh is an undertaker, a mortician who helps prepare the dead for their final viewing with extraordinary care and compassion. She works surrounded by death, but imparts a last bit of life as she sends each person onto their final journey with secretly-placed fresh flowers in their caskets. Morning glories (affection upon departure) for an old woman who was much loved. Marigolds (cruelty in love) for the man who abused his wife.Clara’s days are structured and constant. She clings to her loneliness just to make it through each day, keeping even those that care about her most at arm’s length. Until the day she discovers a sad little girl named Trecie playing in the funeral home. Until Detective Mike Sullivan starts asking her questions again about the still unsolved death of another little girl that was nicknamed Precious Doe. Until the day that it seems that these two little girls are linked and that the clock may be ticking to save Trecie from a similar fate. MacKinnon has created a wonderfully flawed and human heroine in Clara Marsh, who must face the demons and ghosts of her own past in order to help Trecie. Given her occupation, it is inevitable that the mysteries of death and what come next are examined. Clara is privy to the beliefs of so many different kinds of people because of her job, but she herself is unable to believe. While she does her job, she sees what tethers our bodies to life, but it will take solving the mystery of Precious Doe and Trecie for her to truly understand what it is that tethers our souls to this earth and to one another. Highly recommended and not to be missed, TETHERED will keep you thinking well past the last page."

Posted by Lynne Griffin and Amy MacKinnon at 7:00 AM

Wow. Wonderful. Amazing. Well-deserved. I'm thrilled for you, Amy, but perhaps even more thrilled for the readers who'll discover this book because of the wisdom of the Borders Original Voices judges!

Thank you, Judy. Now if only I could get on Taiwan's bestseller list like your ALL THE NUMBERS! What a huge triubute that is, Judy, congratulations.

Kira, your support is much appreciated. Thanks!

Amy,
It is just amazing to watch someone's dream come true...to see all of your hard work pay off...it is so inspiring! Your family must be thrilled for you!! I'll make sure to be at the front of the line to buy my copy of Tethered...August 12th????

I am just speechless. This is so exciting and I am so very happy for you! I can't wait to read TETHERED.

That lump in my throat has returned...this time for joy. Amy, you have so earned being an Original Voice and more!

Thanks, Mo. I can't wait to hold yours in my hands.

Kristy, remember that day in Boston? You gave mer such hope. I'm forever in your debt.

Lisa, I'm so, so late getting it to you. I will be sure to get myself to the post office tomorrow. You've been there every step of the way and I want to share it with you.

Larramie, I didn't quite wrap my head around it that it was a review until you said that. Hmmm, I need to rethink this.

WOW. Congratulations!!! I'm so excited for you. I was excited to find out that my book is the FaithPoint book club pic for Books A Million in August. It seemed like a big deal, but whoah, BORDERS? That is Huge!!! Many congratulations. I think your book is going to be a huge hit. Next, we'll be seeing you on one of their author videos, right? Maybe I will order your book from Borders now. :)

Congratulations, Amy! You must be so proud of the buzz your work is generating. Isn't it nice to know your words, and thoughts, are moving people in such an effective way? The review itself was riveting, and I certainly can't wait to read your book.
~Joanne

Tina!!! Congratulations!!! Books-A-Million is gigantic! You must be thrilled. Brava

Joanne, your message is so kind and so appreciated. Thank you. I'm thrilled that there are people out there reading it the way I'd hoped it would be read. Not everyone will and that's okay.

Original Voice.
It truly is and you deserve every bit of praise. I am so grateful to have read the galley and appreciate the truth behind this review.
There are more like this lined up, many more.
So happy for you.

A million congratulations! I am so looking forward to reading this. It sounds simply WONDERFUL! :)

Thank you, Mardougrrl. And btw, I know exactly what you mean about the black days, when it seems everyone around you is moving onward and upward, and you're standing still -- or worse. Thirty-five is nothing. My hard and fast goal was forty. Just turned. Keep going, you'll get there.

Why oh why does Blogger eat my comments here?

As I said on Tuesday but am happy to say again, congratulations on a job so clearly well done!!!

I never had a single doubt about your originality nor your writing voice, but I'm so pleased to see both recognized in a way that will do you and TETHERED such good.

Thank you, Therese! It is a business of two steps forward, one step back, but this feels likea a leap forward. Thanks for all of your support along the way!

I just started reading Tethered last night and I stayed up till one. So far, really impressed. Good job!

Now I've finished it and I can say it stayed good to the end. Well written, plausible, and engaging.

The folks at Shaye were right to get excited over this work.

It's held together by story and imagination, a refreshing contrast to some books which seem to stagger from one shocking graphic scene to another.

Much detail of what happens in Amy's book is left to the reader's imagination, and as such, we realize how it could be happening for real anywhere, even right next door.

Amy, this is wonderful!

By the way, Larramie's last line took the words right out of my mouth!

Oh, John, you've made my week! I haven't the words.

Heather, I know, I know, but I honestly didn't realize it was a review until Larramie wrote that. I know it makes me appear dense -- maybe I am -- but it felt as though Deanna wrote that in the spirit of a reader rather than a reviewer. Call me a hypocrite and send me out for eggs.

Whoo hoo!!!! Congratulations! This is going to be a big one!!!

Whoo-hoo is right! I'm already starting to hear from early readers and it fills my heart.