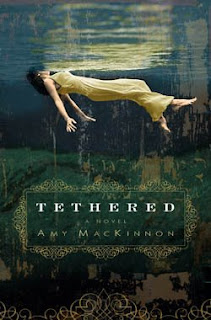 Mystery. With her stupendous prose and intricate characterizations MacKinnon has penned a winner - Hardcover

Tethered A Novel by Amy Mackinnon
Read the full review
Tethered is the first book in recent memory that I absolutely could not read fast enough to see how it comes out. The book is deceptive. Is it a mystery? Is it a literary novel? At first it seems to be a rather interesting, if uncomplicated, story about a young woman, Clara Marsh, who works in a funeral home as an undertaker; assistant to the funeral director, Linus Bartholomew. She's had a rather difficult life – orphaned at an early age then raised by an overly strict Bible-thumping grandmother – thus she is pretty much a loner. So when she encounters a little girl called Trecie in one of the mourning rooms I was expecting a story about how Clara begins to relate to the youngster and eventually overcomes her inability to connect with others. Boy was I wrong. .... Read full review.

Posted by Lynne Griffin and Amy MacKinnon at 8:05 AM

I couldn't agree more! Tethered is an amazing novel by a talented new voice. So proud of you Amy!

I second the kudos! TETHERED was a beautiful and gripping story and the most powerful debut novel I've read in years. Congratulations Amy!

Whoo-hoo, Amy! Isn't it great when reviewers get it so right? Wonderful news!

What a lovely holiday gift, the review AND the book!

Congratulations, Amy, on your debut year.

Thanks to each of you for making it such an extraordinary year. You've made it that much sweeter.

Couldn't agree more with the review, having devoured the book with savor.
Congratulations Amy

Thank you, Usman, Wishing you a peaceful Eid.

This article is mind blowing. When I read this article, I enjoyed.