The day started at 5:00 am when I met my dearest friend at Boston's South Station and we took the Acela to New York. We chatted the entire trip, making the four hours pass in a blur. We arrived to a deluge of rain and thousands of other writers converging on the city to attend AWP. But we weren't there for a conference. No, finally, finally, after several wayward attempts, I had hopefully found the photographer who would take my author portrait.

In defense of the other three photographers who tried to capture a suitable image for my jacket, I haven't the face for pictures. There are no neat lines and lovely angles for the light to hug. No interesting crags or scars. It's a fine face, but it's not what anyone has ever referred to as photogenic. When my husband and children viewed each of the earlier attempts, they either laughed aloud or shook their heads and walked away in silence. Again, it was the face, not the photographers. Still, I had high hopes that the fourth photographer I contacted would solve my problem.

From the first time we spoke, the photog assumed command of the situation and I was happy to cede it. She told me what clothes to bring (nearly an entire wardrobe), the colors and designs. She instructed me to have my split ends trimmed and nails manicured. When I told her I had put on a little weight sitting here at my desk, she suggested I eat only lettuce and water until the day of the shoot. I laughed, she did not. I instantly adored her.

My friend and I arrived at the photographer's loft on time (I despise tardiness in anyone, especially myself, and I suspected the photographer would not suffer such foolishness gladly). She instantly dug into my clothes and jewelry, quickly rifling through my plain tops and chunky necklaces. Clearly, it was mostly wrong; I think I may have disappointed her. My friend, a petite thing, offered some of her blouses and jewelry, but her style is eclectic, i.e. effortlessly hip on her, desperate on me. The photographer decided a basic black turtleneck would be best.

Next, she introduced me to her preferred make-up artist, Pamela Jenrette. Ever meet someone and instantly fall into easy conversation? She sat me in her chair, plugged in her curlers, and chatted while she applied my make-up. *!So much fun!* At the end of it, I actually felt pretty. I highly recommend her services. She's good.

Lights, camera, action, and the next four hours flew by while my friend waited (quietly!) in the wings. The photog is a perfectionist and I was more than willing to do exactly as she said. Hold the pose for five minutes while she judged the Polaroid? No problem. Contort my body into an unnatural pose until my back spasmed? Happily. Withstand a barrage of flashes that eventually ignited a migraine? Yes, yes, yes! I trusted her artistry completely.

I was right to do so. For the second time, there exists an image of me I like (the first is of me two weeks overdue with my third child while my other two play nearby; I was ginormous!). It's the one my friend would have picked too. Personally, I think Sigrid Estrada is a genius. 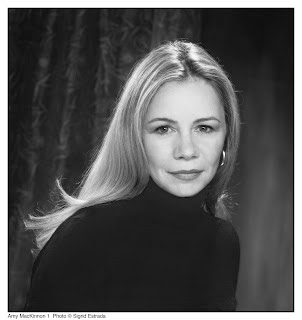 Wow! You look beautiful. You are beautiful. Well worth it, indeed. (And I'm so glad you had fun in the process!!)

Oh, my, Amy. Perfect, beautiful, smart. Just like your writing!

Kristen, thank you. I love photo shop. I did ask that she not make me appear younger, though. I love my wrinkles.

Judy, my husband said it made me appear smart - then we both laughed. And thank you for the compliments. I'll hold onto the one about my writing all day long.

The best: You look as lovely as your writing voice sounds!

Larramie, I love B&W too. I've always wanted to be thought of as elegant, and while I'm glad this split second of my life captures that, the truth is a bit different: I love my jeans and slippers. How about you?

Now what would you imagine? ;) Truth is I enjoy casual quality and warmth -- well-tailored trousers, sweaters (in deep, rich colors) galore and crisp white shirts.

Hi, I just came over for the first time from John R's blog. Honestly, I don't know what you're talking about. I think you're lovely. I'm looking forward to poking around your blog.

amy, i confess that while i was reading this, i was thinking that you were going to way too much trouble for one little photo. but then i saw the pic -- wow! you look fabulous. AND you look like yourself -- it really captures you! just gorgeous, and i think the black turtleneck is perfect. well done, and definitely well worth it. i hope you and friend had a wonderful time in nyc. kathleen

Welcome, Polly, I love your name and thank you for your kind words. Isn't John Elder Robison fantastic? I really enjoyed his post on the psychologist who defined Asperger's as an illness. And you have an interesting blog your self.

Kathleen, I know, I know. I thought it could be done on the cheap with a minimal amount of effort. I was wrong. Then I tried to step it up with someone who takes fabulous photos, just not author photos. It's an ntirely different beast, the photo jacket. It's a completely different art form than standard portraiture. It needs to convey something about the story too. Thanks for stopping by.

Well, I left a comment earlier but it disappeared into the ether...

At any rate, I said more or less what you've just said--that it's wonderful when a photographer captures the essence of both author and work. This photo is compelling and mesmerizing, which if I recall right are the same adjectives being used to describe TETHERED.

Thank you, Therese! I have you to thank for making me realize just how important the photo is, it's every where.

Amy--beautiful picture...and this, after how many hours of travel from your door to the NYC studio????

If I ever get published...I'm going to have my beagle, Finley, sit in for my author photo. She's a beauty, and I take a lousy picture :)

Hope you had fun on the trip...one step closer to getting the book on the shelf! Can't wait to read Tethered!

Amy,
You look pretty and so writerly.
Usman

Oh! You look so lovely and you have that hint of a smile in your eyes that tells me you have lots of secrets. Just gorgeous!

Hi, Mo, it was a long day, but there were also AWP events to attend. As for Finley, excellent idea. If I could have my Babe in my stead, I would have. Good to know there will be a friendly face at the Muse!

Usman, thank you, though today I don't feel very writerly. You understand.

Lisa, welcome home! Yes, yes, lots of secrets. As Sigrid clicked away, I tried to inhabit my protag's sense of melancholy and hopefulness. Heck, she could be a writer!

Melancholy and hopefulness; this photos captures both. Can't wait to see it on your book jacket! K.

Yes, she is one of the best author photographers out there! Congratulations...you look smart and alluring and like someone we should all read very soon. :)

SS, that's such a nice thing to say! I can't wait to see it too.

Mar, thank you! Kind of an odd concept to imagine people will actually be reading the book. Yikes.

Oh this is so cool and you look so beautiful and amazing! You look like an amazing woman, which you are you know!

Ello, I can't wait until we meet in WDC. You're a pistol!

Oh, Amy! It's stunning, a face you can't look away from. How perfect for your novel.

Patry, you've been on my mind daily, but especially today. So good to hear from you and thank you.