Is That What It's Like To Be A Writer? 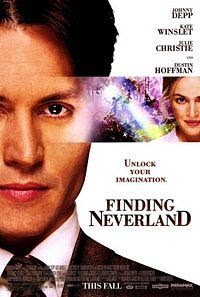 
Those words were uttered by my youngest child as the family watched Finding Neverland, a movie "inspired by fact" about J.M. Barrie's inspiration for Peter Pan. At the start, we saw Barrie watch a disgruntled audience stirring in their seats, frowning, shaking their heads as his newest play unfolded. As he peeked at them from behind the curtains, rain began to fall on them, which of course, they never noticed.

"He has a good imagination," came the comment, and then, yes: "Is that what it's like to be a writer?"

As you who read this know, the real answer is yes and no. Do I actually see rain falling on the heads of those who are unhappy, who dismiss me? No. Does the analogy cross my mind, do I imagine how it might be if the heavens did break open upon them? Sure. Do I live in my head instead of the world around me more often than my neighbors might? I suspect so.

The note-taking, too. Barrie writes in his notebook as he sits on the park bench, the twinkle of a bell tied to a kite, the sunlight bouncing off it as it jingles in the air, recorded for him to absorb again later. A moment captured. The bits and pieces of what you see slowly coming together into a new and unique reality.

I once asked my son to give me five adjectives or phrases that describe me, an exercise worth trying. I was not expecting much that was pleasant, based on the cycle we were in of late. He surprised me: none were negative, save that he said I need to relax more, and two of them were these: funny and weird. When asked why those words, he shrugged. "You know. You're not like other people. You do crazy stuff."

Like dancing with a bear, like watching rain fall inside. Okay, well, maybe. Yes, that is what it is like to be writer: magical. And the next time someone asks what it's like to be a writer, well, maybe you can suggest they catch a glimpse for themselves.

Posted by Lynne Griffin and Amy MacKinnon at 7:48 AM

Labels: Creative Work, Ideas, Making a literary life, Who we are as writers, Writer-Hannah

Ooh, Hannah, I love this. It is magical. I need to remember and look for the magic when I feel like I'm slogging through.

It's worth the rental, not only because Johnny Depp and Kate Winslet (and Dustin Hoffman and Julie Christie) are in it. As you point out, even writers need to be reminded there truly is magic in our lives; I was taking notes of my own afterward!

What an amazing way to be described! Thanks for the reminder that it's worth taking the chance to ask the people around us what they see when they look our way. I needed that today :)

Really a great work, I love the writing work so much.Students issues are really need to discuss,they prepared to interest for one naturally, and do your own particular examination with respect to it, or raise a supporter to impel a referral. When you raise a supporter or somebody from your college or a partner, you are in A to a great degree higher situation than people that should be constrained to interest for one naturally. once your suggestion is likewise a brilliant one, then you have the capacity to secure that you basically that you just essentially can trust the scholars from the postulation composing administrations, degree you've a near to companion who can Answer any inquiry you've in regards to the methodology of procuring and dealing with an expert creator on-line. Normally regularly the right situation for each understudy who is following up on a proposition because of yet basic it's to go through the experience of contracting this sort of administration. Best Need With Essay Writing Service Provider. For best exposition you can pick the remark from Resume Writing Service suppliers and customers for essay and related writing help like resume writing.