The Other Side of the Table

I've been attending Grub Street's Muse and the Marketplace writers' conference since they began seven years ago. Seven years ago, I had only just started writing fiction while reporting and writing the occasional op-ed. It was after Jonathan Franzen said on Fresh Air that the days spent writing The Corrections were among the most fun of his life. I remember that first conference clearly, the workshops, the other writers desperate to learn the secret to getting published, and a memory I've kept close all of these years, a class taught by the author of Memoirs of a Geisha, Arthur Golden. In that workshop, he told us of his struggles to write that novel, that the most important part of this writing life is to never give up. I believed him and soldiered on.

Through the years, I've sat in the audience while on the other side of the table were the likes of author Margot Livesey, Little, Brown editor Asya Muchnick, and the great literati Julia Glass, Grace Paley, Charles Baxter. It was only a table. A six-foot by three aluminum job, made pretty by a starched tablecloth and dotted with crystal water goblets. To me, sitting on the other side, it might as well have been an ocean.

Last year, I decided I'd attended my last conference. I'd worked with my agent for over four months on my manuscript and revisions were at a standstill. My book would never be published after all. I found myself weeping through Mr. Baxter's speech appropriately titled, Losers. Was it a sign?

But it did get published and I did go this year. How could I not? Jonathan Franzen was giving the keynote, Julia Glass was teaching a workshop, the inestimable Lisa Scottoline too (she is fantastic!). Invited guests this year included the lovely Sally Kim, Asya Muchnick again, and Dorian Karchmar (we all loved her). But there was someone else sitting on the other side of the table alongside the others. Me. 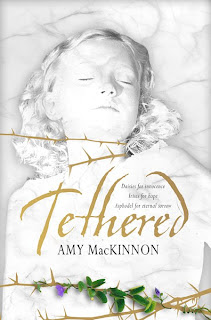 Posted by Lynne Griffin and Amy MacKinnon at 6:35 AM

Oh, Amy, are you still pinching yourself? The cover is stunning and your story, of crossing that gulf from one side of the table to the other, is a wonderful metaphor of what we do when we sit down to write. We're trying to cross that gulf between our ideas/words and our readers. At times it feels unnavigable. But we keep rowing because there's no other choice. And then, we look back and see how far we've gotten.

LOVE the cover, Amy! And I'll never forget meeting you at the Muse while standing in line two years ago. Who would have guessed we'd be debuting together??

Judy, we just keep rowing as hard and as long as we can, don't we? Land ho!

Thank you, Gail! I'll never, ever forget meeting you. You were brimming with charisma, even as you were subdued by your recent struggles with cancer. I knew I wanted you as my friend. I so look forward to that day in October when I walk into my booksotre and see CANCER IS A BITCH on the front table.

What a great cover. It is journey, this desire to be published. I am just learning that writing a novel is not a sprint, it is a marathon.

That's right, Usman. One foot in front of the other.

Why must we feel we've hit rock bottom, Amy, before rising to the top?

This cover is so lovely and it's too bad my sister is scheduled to vacation in Switzerland this summer rather than the UK! *sigh*

Larramie, as always, thanks for stopping by with your daisies (Sara incoporated them into the title page beautifully!). TETHERED won't be out in the UK until January; they're just getting a head start.

"Stunning" is the word that came immediately to mind and I see to Judy's too.

You've all brought to mind one of the most recognizable book endings...

"So we beat on, boats against the current..."

Lisa, I love The Great Gatsby too!
Perfect analogy!

Love the rowing metaphor here, it's so true! Amy, sitting at that table this weekend must've felt like the last line of a famous little song ... Life is but a dream.

Amy,
It was truly wonderful meeting you this weekend. I had so much fun chatting with you at all the parties and in between panels. And your editor, Sally Kim, is amazingly sweet.

I LOVE your UK cover. So hauntingly beautiful. Can't wait to read TETHERED. Congrats on your debut novel. I hope that we cross paths on our signings this summer.

Joanne, it really was. I love that it happened because it proves to each of us that it can. It's all about persistence and attention to craft. But then you already know that, don't you.

Megan, it was great meeting you and your family, too! And thanks for contributing your time to Grub Street. We're all looking forward to reading SISTERS OF MISERY this August. Congratulations again.

Hi Amy, Hannah, Lisa and Lynne,
It was great to see you at the Muse last weekeknd! I enjoyed your panel. As usual, you are all so willing to help, inspire and educate other writers. I learn from your posts, and I'm sure many others do as well. I must say, that is what I appreciate the most in all of my Grub Street experiences...that people are so genuine in their support and dsire to inspire great writing.

Thanks for sharing your talents.
Mo

No, Mo, thanks to you for being such a wonderful spirit supporting us in so many ways.