The Character is the Story 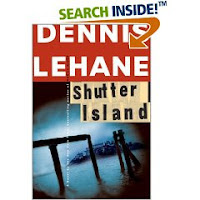 Sunday was a day of decadence.

While my children entertained themselves with painting and books, video games and IMing, while my husband prepared our dinner in the kitchen and my dog chased turkeys in the backyard, I laid on the couch, tucked myself under a blanket, and read a book cover-to-cover. It was divine. I justified it by telling myself it was research and it was.

The book was Shutter Island by Dennis Lehane. No, it isn't as good as his others --Mystic River and the Patrick Kenzie series -- but it does share one important aspect, in fact, the most important aspect of any good story: memorable characters.

I finished reading Shutter Island about 11:00 p.m., long after I should have been asleep. But I stayed with it not because of the plot, though it had that great hook everyone talks about; not because of the pacing, though it had that too; I stayed because of Lehane's protagonist Teddy Daniels. He moved me. And when I closed the book hours after my bedtime, I wanted nothing more than to give Teddy Daniels shelter from this cruel world of ours. I cared for him. Deeply.

That's been the problem with a lot of books I've picked up lately -- great hook, okay pacing, life-altering conflict -- but the characters fall flat. I read 20, 30, sometimes as many as 50 pages and then I close the book. If I don't believe in the characters, feel them as wholly as I do the people around me, I simply don't care to read more.

Jane Austen isn't beloved because of her stories and conflicts, pacing and settings. Her books are still read today because her characters come to life on the page. Ms. Austen didn't think readers would much like her novel's namesake Emma, too flawed, she thought, but that is exactly why we adore her. Emma is a reflection of our misguided desires. Have you read Austen lately? The writing is difficult, the conflicts are simple, and we all can be assured of how the stories will end, and yet her books live on and on because her characters do.

Stephen King isn't the bestselling writer of all time because he writes horror. I don't actually read horror, nor do many people I know who read Stephen King. We read his books because he writes characters who are as real to us as the man three doors down with the bad teeth and taste for Schlitz, the one who calls the ambulance to his home every so often when loneliness gets the better of him. King's good guys can be bad (Larry Underwood) and his bad guys can be unbearably sweet (Trashcan Man). His characters are alive. Just writing about it now makes me want to read The Stand again.

I think about all of this as I write my next book. I want to create people who are as real to you as they are to me. I want you to see the grit and tears caking in Mrs. Martin's crows feet; smell the collective sweat of the room that contains them all; I want you to hear the blood pumping in Edith's ears as she runs through the woods and feel the bruise forming at her hip where the gun butt beats in time to her step; and I want you to know George and his angst the way only George has come to know it.

So Sunday wasn't completely decadent. It was just another reminder of what I need to do to write a good book. God, I hope I can.

We have such similar sensibilities...

And I've been having the same trouble finding satisfying books lately.

As for your worry on whether you can write another good book, let me just offer you a supportive "duh." :)

This post is so dead on! I don't read horror- but can't get enough of King. His ability to nail the dialog that goes with the character impresses the heck out of me.

I CAN'T wait to read your book and I'm certain I'll fall in love with your characters.

I couldn't agree more. On Sunday, I was doing some exercises out of one of the many (too many) craft books I have. One simple one was to list 5 (I listed more) favorite novels and then think about the lead character and the kind of plot they all had. Needless to say, character was the overwhelming reason that I loved each of them.

Therese, I don't know how you found time to comment, but thank you for the supportive "duh!"

Eileen, as I was writing this post I was hoping you didn't assume I counted UNPREDICTABLE among them. I lapped up every word of it and can't wait for your next book. Sophie would shop at Talbots. And King does nail dialog. No one is better. Thanks re: wanting to read my book.

Lisa, isn't it the truth? It's all about the characters. We'll suspend disbelief with just about any plot turn if we believe in the characters. And thanks for the "duh." Failure is a terrifying prospect..

Amy, when you described Sunday as a day of happiness in your SIMPLY WAIT comment, I wondered what was the book? There's nothing better than getting lost among pages, is there?

As for "hoping" you can write another good book...there's George and he would never let you down! ;)

I just hope I don't let him down. But Ihad a sign today, you know how I'm always looking for those signs. I saw the man who helped inspire George; I knew him as a child, saw him again five years ago, and then just today. I'll take it.