It's getting close to Halloween, that time of year when small children and frightening teenagers knock on your door and bid you Trick or Treat! It's time for us to get into costume. We wanted to share with you, our readers, what literary character we would love to dress up as.

Lisa Marnell
I actually did dress up as Jane Eyre. Yes, for Halloween. I had watched a British version of this classic on television and the next day my brother suggested we go out for one final Halloween; we were far too old, but who can say no to free candy? I wrapped my long brown hair in Princess Leah-like cinnamon buns at the sides of my head. I found a dowdy brown skirt and a white blouse. I didn't frighten anyone that night - or did I? 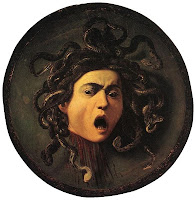 Amy MacKinnon
Do myths count? If so, I would like to inhabit the world of Medusa. At least then I would have an excuse for all of the voices swirling about me. And I do like snakes. And I like the idea of turning those who bother me while I'm writing to stone with just a look -- just for a little while. Yesssssss, Medusssa.

Hannah Roveto
When I was about ten, I made a paper mache over-the-head Snoopy mask; does that count? Not terribly literary, but then most of the fun characters that come to mind for me are from young adult novels. How about Narnia's White Witch?

Lynne Griffin
When I think of dressing up, I think more about the theatre than Halloween. If I had the acting talent and operatic voice needed to anchor the show, I'd love to dress in the gowns Christine wears in Phantom of the Opera. Sadly, my job each year is to answer the door to ghouls and goblins.

Posted by Lynne Griffin and Amy MacKinnon at 7:00 AM

I'm always drawn to Scout's ham costume from To Kill a Mockingbird . . .

I've got the hair for Medusa or the White Witch! :)

Judy, you have me rolling.

I don't know about me, but at the request of his older sister my son is going as Eric Carle's The Very Hungry Caterpillar. This counts as literature right?

BTW-Amy, I have a few chapters left of Tethered. I love your writing voice! Wow. First novel??? The story itself is haunting me and I find myself a bit nervous around most of the characters. I tried to explain to my husband why I'm still reading it. He thinks that I should stop if I'm disturbed, but it's hard to describe a good kind of haunting to a non-reader.