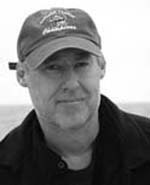 I met Stewart O'Nan last month when we both participated in a fundraiser for the Mark Twain House, Writers Read for Twain. He wasn't what I expected, not at all. I thought he would greet each of us with a polite hello and then retreat into himself. If you've read his books, then you might understand why I assumed such a thing. His work delves into the internal lives of his characters, deeply, in exquisite, discomfiting detail. Even his settings, such as the lake in Wish You Were Here, are fully realized characters. His books are often called quiet and it's somewhat true. Like that lake, they are to a certain degree, but we're all well aware of that old adage of what goes on beneath the surface.

That day at the Twain House, Stewart O'Nan was unlike his books: he was chatty, cheerful and kind. We talked quite a bit and when I confided how nervous I was to speak in front of such a large group, before so many of my favorite writers, he and Arthur Phillips took it upon themselves to sit on either side of me in the theater and whisper support until it was my turn. I was quite at ease because of it.

Afterward, I approached him with my copy of his novella Last Night at the Lobster. It is a little gem, 160 pages, and with more heart than most "big books" I've read lately. As he signed, I asked if it was a difficult thing to get it published considering it's length, the fact that it wasn't a big story and came with no discernable hook to promote it. He said it was. But, he added, I didn't listen because I believed in this book.

Though I left inspired, enough to attempt something similar myself, a project I'm working on now that has me hugely excited because of the challenges it presents creatively, but terrified because of the obstacles it may encounter in the marketplace, I thought it was an easy thing for him to say. He is Stewart O'Nan after all. Who wouldn't want to publish him?

And then I read this. His editor at Farrar Straus & Giroux, turned down the manuscript for Lobster. It was Stewart's tenth book and it was rejected. Imagine? Thankfully for all of us, Viking bought it and another, Songs for the Missing, due out next week. Yes, I'm excited to read it too. 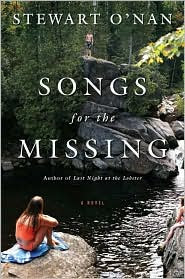 Stewart O'Nan has taken great risks in his writing life, he, with the support of his wife (after reading the article, don't you adore her?), made real sacrifices for his writing. His path hasn't been linear, it's more a series of forks: heading north and then bearing west, pivoting east then moseying southwest. He's written thrillers, historical fiction, and a baseball memoir. Though he could have taken the easier route, he chose a journey filled with uncertainty and many, many obstacles. I suspect he did it to honor the integrity of his writing.

I suspect we all should.

Posted by Lynne Griffin and Amy MacKinnon at 6:54 AM

"honor the integrity of the writing"--that's truly what we need to remember, isn't it.

Thanks for this, Amy.

His experience is a reminder that nothing in this business is ever guaranteed, so whatever happens should be celebrated as a gift.

Judy, we must try. And thank Mr. O'Nan. Isn't he marvelous?

Carleen, I suppose we could take that one giant leap forward and say nothing in this LIFE is ever guaranteed! Let's celebrate whatever gifts come our way each day -- at least try.

Amy, even before reading your book, I knew it would be excellent because your posts always tell a story so vividly. I imagine one day you'll be able to bundle up all of these little goodies and publish them in a collection just as great writers before you have done with their personal essays.

Thanks, Tara, that's an awfully nice thing to say. You made my day.

Thanks for the link to the interview. I always feel inspired by people who have the courage to honor their writing with their conviction.