My Tiff with Bill (W. Somerset) 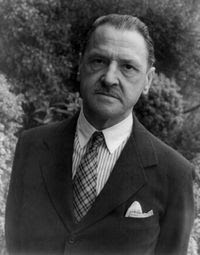 Bill and I are having a bit of a disagreement; Bill, of course, is W. Somerset Maugham, and this tiff has gone on for three days. The whole thing started with The Grub Street Rag, which offers news of the local literary scene and tempting class offerings, and my favorite, a quote of the week. This week they reported our dear friend Bill once said: "There are three rules for writing a novel. Unfortunately, no one knows what they are."

When I first read that, I started to agree; on further thought, I had to argue the point. You see, I have started in on Novel Two, unleashing what has been percolating in my head for some months. At the same time, a neighbor called. She has thought of writing and wants to know how to make the dream real. As a result, I had been giving this Rules of Writing A Novel thing some attention, and I have proposed to Bill three rules I think are undeniable.

Rule Number One: Have a plan. Writing a novel is a journey you need to think through a bit before you head out upon it. Say you live in Boston and something inside you has always wanted to travel the U.S., east to west. You decide you want to end up in L.A. You get maps and you plan for supplies and provisions and clothing and lodging; you mark out routes and alternate routes. A novel requires this, too. Some people get very organized and do outlines. Those people actually end up in L.A. with their manuscripts. Other people plan and yet allow for a bit of a surprise; they end up in Portland, Oregon, which meets the goal equally well.

Rule Number Two: Employ sitzfleisch; strong gluteus maximus muscles put to use to achieve what you want. The rough English translation is stick-to-itiveness. Bill can't deny this one. He wrote his first book at 16. He worked on his second book every night while he was studying for his medical degree. He proof-read Of Human Bondage outside of Dunkirk while working as an ambulance driver during World War II. No matter what else goes on in life, you write. And edit. Every day you touch the work in some way. As on any journey, the more you do it, the easier it gets, because those glutei get stronger with every use.

Rule Number Three: Learn and build on your craft. You have a story in you. Break it down. What do you imagine this story to be like when you are done, and what do you need to do to have the craft to produce that book? Plot, characters, setting and other elements of writing are the supplies you need for your journey. Know what they are, and get them onboard. What is the voice? What the heck is voice? Find out. Read. Take classes. Read again. Write it and rewrite it. Edit, fine-tune as you take more classes and refine again. An artist constantly works on craft. What you wrote yesterday was good, if you put your heart into it. What you write today will be better if you want to make it so. What you write tomorrow will be your best.

What you put in the novel is up to you. How you structure it, the story you wish to tell, the guidelines you wish to follow or learn well enough to break are yours to choose. There, it's wide open territory. Bottom line, though, you can start that journey if you follow three rules, and I've given you my suggestions on those. Meanwhile, Bill hasn't gotten back to me with his thoughts, which makes me a bit nervous. Or should I be more nervous if he does respond?

Posted by Lynne Griffin and Amy MacKinnon at 7:43 AM

Hannah, I love this. It seems like it belongs in one of the writers magazines.
How goes the first novel? Have fun with the second!
Mo

Hi, Mo! Thank you for that. First novel is off to my top-top-top agent choices, with top-top and top names and addresses close at hand. Am SO having fun with number two already! Am working on my plan, exercising my behind, and identifying what I want to and need to do better this round...!

As many times as this question comes up, I'm not sure I've seen the steps described as elegantly. I may need to print this one out!

Thank you; my neighbor made me really think about how to take that step from dreaming to doing, and how to keep doing. (So if you're reading this, J, hi and thanks!)

Thanks Hannah. I saw that too and my first thought was, well, if no one knows what they are, how does he know there are three?

Glad there's only three. I'm working on all of them.

Love the LA vs. Portland analogy. Merits to both!

I was glad he only said three, as well! As for the geography, Lisa is in Portland, my brother is in Portland, and despite a good number of friends and relations in the San Francisco area, which I do love, I kept it to two.

What a charming yet sensible approach you offer, Hannah. How could Bill disagree?!

I think you are absolutely right, especially the stick-to-it-ness...that is the LAW as far as I'm concerned. To quote one of favorite movies, and put my own spin on it, "Never give up, never surrender (the pen)."

Well, I just went to redlines and deadlines and saw this on the sidebar. Thought you all might want to take a looksie.

Larramie, do we assume Bill agrees if he doesn't disagree? Hmmm... and GG -- thanks for the link. I like her list even better!

Hannah, though we must never assume anything...we can hope. ;)

I loved your list, lots of useful advice, which I'll try and remember :) Thank you for this